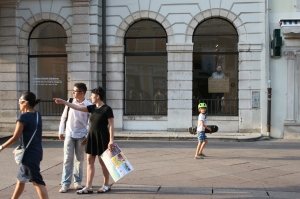 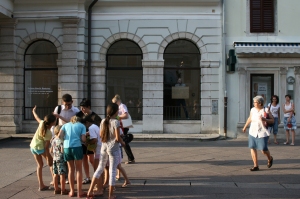 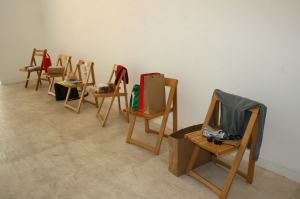 A community of temporary dwellers of Korzo 24

Move along with the stream of visitors. Make no sudden movements. Avoid loud conversation or laughter… Instructions such as these could be seen at the collective performance Protected Space, done by Božena Končić Badurina at Biennale Kvadrilaterale in 2011. The visitors, as the main protagonists in this performance act, were inspected by the security guards positioned at the entrance, and then they followed instructions similar to those usually given in larger museums and galleries for security reasons.The artist’s new project, shown in Mali Salon gallery, once again introduces a play of hidden glances and interactions. However, this time the play breaks the confines of the white cube’s coordinates and explores the relationship of the gallery and the urban space. Continue Until It Becomes Uncertain is determined by the gallery’s position in the city center. Its large windows look directly onto the street; however, the gallery is too often just a backdrop to the street life, rather than being a vivacious place of meeting and gathering. In an undertaking that aims to create a  setting where the street and the neighborhood become part of the gallery the gallery stretches onto the street, the gallery observes itself and the street, draws the visitor inside, the artist employs drawing text, audio material and performance. Concretized views from the gallery on the street and vice versa, i. e., the network of dual observation – by those who are inside and those who are outside – emerge as the central theme. Instead of a documentary depiction of the gallery’s position in the urban tissue, rendered by a neutral observer, the outcome is a subjective portrait of the gallery from the perspective of neighborhood. This portrait captures several positions at the same time, overlaying internal and external views, but without concealing the blind spots and communication delays of urban existence. It treats the accuracy of analytical mind as something of secondary importance. Aiming to bring art and audience together, if chooses reciprocity and changeability of current relations. It is neither intellectualized, nor sentimentalized. It is simply – playable.

Audio work Korzo has developed from an immediate observation of the gallery’s surroundings. It includes the flow of passers-by, talks with workers from the nearby shops and businesses and the voice of a speaker who relays the story about the relationship between the gallery and its neighborhood. It remind of a chronicle of a space user, who explores the well known, local space, refusing to take it for granted… Observe the street, from time to time, with some concern for the system. Apply yourself. Take time. [1]

As in the predecessor of this work, A Guide To The Gallery, shown in Forum, this audio work is the personification of the gallery itself, acting as its spokesperson[2]. We listen to sounds coming from the urban vortex and observe its flux, having received, having received an opportunity of recognizing the details of the accelerated jumble. In this process, the details temporarily assume form and character; they come within reach, but elude us all the same. Nevertheless, by listening and observing again, we get a more profound insight into the everydayness of life. In the flowing descriptions we almost recognize faces from the nearby shops, whose attitudes on galleries, contemporary art and free time may indeed arouse our curiosity.

Intended primarily for random passersbay. Stage Directions doubles the street scenes through live images. An external protagonist performs a series of usual pedestrian routines, which correspond to instructions written on large sings shown by the performer standing in the gallery by the window. The used signs remain in the gallery, openly acknowledging the fact  that the performances were directed, enabling their re-enactment. This unobtrusive bridge connecting the internal and external space, the artistic and the mundane, is supported by zooming in on the peculiarities of pedestrian behavior, which are so easily overlooked in our everyday impatient bustle. The glass membrane of Mali Salon becomes a communication channel connecting the gallery zone with pedestrian zone, while preserving its dual characteristics of openness and closedness. The humorous gesture of the double coding suggests that the gallery is visible and visible at the same time. The gallery is within everyone’s reach, yet, only few of the passersby enter its premises, which is the fate of numerous exhibition spaces that are not heavily advertized. There is a strong impression that the need and desire for art are dying away, amidst the quickening and uncertainty of neoliberal age, where free time has become a hardly affordable luxury. Therefore, the live images aim to reinforce leisure, by purposely choosing for their stage an ordinary, unspectacular pedestrian zone, a zone that may symbolize a departure from the imposed rhythm of consumption and profit hunt[3], following the popular belief that public space should be viewed and experienced as a  place of meeting and gathering, rather than just passing through it. Finally, this zone is a voice of resistance, and act of defiance to the status quo.

Parallel to establishing contact with the temporary dwellers of Korzo, drawings on the wall speak directly to the immediate neighborhood. They evoke a simple, but often  neglected question as to what happens on the other side of the wall. The first drawing is focused on a group of teenagers who occasionally gather in front of the gallery’s entrance, but they never go inside. The other drawing is oriented to the pharmacy located just a few steps further from the gallery. Both drawings are made in a 1:1 ratio and their simple lines encourage us to meet the temporary dwellers on the other side. The temporary dwellers on the other side. The drawings discreetly outline their presence, without making them appear static or stiff, and, with the added statements referring to their impressions of the gallery, they reveal their viewpoints. The drawings capture these „dwellers“ while they are on their break between lessons, or perhaps when they skip classes, or, on the the other side of the opposite wall, they depict people busy with their work. They explore our perception of free spaces and possible places of togetherness. In short, spaces have multiplied, been broken up and have diversified. There are spaces today of every kind and every size, for every use and every function. To live is to pass from one space to another, while doing your very best not to bump yourself, says Perec.

Also alluding on the permeability of the symbolic walls inside and outside of the gallery space, there is a video projection titled The Gallery. In the back of Mali Salon, a text is flowing on the wall, sentence by sentence, coming out of the gallery’s gut, fall into in a steady rhythm, like breathing. It contains comments on subtle details of spatial interactions, seemingly casual notes about life of the exhibition space and its users. This work passes from fluidity to a concrete matter, from anonymity to  embodiment. In this process, it incorporates the views of the performers, whose presence in the gallery is constant, and the views of women keepers, whose presence goes mostly unnoticed.

Through their comments on life and free time, the characters become more than just strangers to us. Their personal stories encourage us to search for common denominators. We learn that young people are coping as best they can, trying to further their education and find a job. It is precisely here, in this backstage, that we verify the artist’s position as a discreet guide through the mise-en-scene of this exhibition, which may turn into a sheer pleasure, a recreation of our grey cells, a play of deja vu situations, socially sensitive existence.

Continue Until It Becomes Uncertain supports unobtrusiveness. This is what makes it so different from the cold, dissociated ways of communicating an exhibition and its space. It stretches the gallery’s code and purifies the relationship of exhibition space and urban surroundings. It intercepts the deep-rooted presentation formats and traditional expectations of an untouchable art object, in order to challenge the tacit consensus on the boundaries separating art from reality. By refusing to acknowledge the elitism of the first and the indifference of the latter towards art production, it vitalizes the social and public function of a gallery space, closing the distance between art and everydayness. Viewing this in a wider context, CUIBC  penetrates into the slipperiness of daily interactions, resolves the hesitation between indulging in openness and responding to the urge for closedness that inevitably, and completely incomprehensibly. Defines the contemporary landscape. It transpires as a zone of testing the contact among strangers and it adds color to the faded social function of public space. Finally, it accentuates togetherness in a gallery space, presenting it as a potential playground where the outcome is uncertain. And thereby exciting. Play, Huizinga wrote, is older than culture (…) A being that plays is a being that goes beyond reproducing itself, that has not got the perpetuation it itself as the only goal. Play is free. One can be coerced to obey the rules of the game, but not to play… This is perhaps why play remains so stubbornly non-functional.[4]